We offer you to get acquaintance with the technology of LED lighting of the newest generation Tri-R/SunLike/Yuji having very high color rendering index (Ra/CRI/CQS), reaching 97 – 98 units. Emitting light, which by its spectrum is close to natural sunlight as much as possible. And with LED lamps built on their base.

Their usage is important:
– in the child care of pre-school age;

Children should be in the rooms illuminated by light sources, radiation spectrum of which is close to natural sunlight as maximum as possible for they will be able to develop the correct perception of colors. And for on them will never develop so called Mowgli’s syndrome in the color perception, when the colors of surrounding objects in natural sunlight seems to be wrong.
For on them, in their very young age will never start to develop pathologies of the eyes, caused by poor quality lighting.

– for to keep the eye health in a later age;
– for the presentation of goods, food and art objects;
Where the first impression is very important.
– for to illuminate the workplaces of doctors and other medical personnel;
For avoid medical errors caused by incorrect lighting.
– in the workshops of artists during the creation of new art objects.

Let’s see in more detail, how differs the mass-produced usual lighting LEDs and lighting LEDs made be the technology Tri-R/SunLike/Yuji . 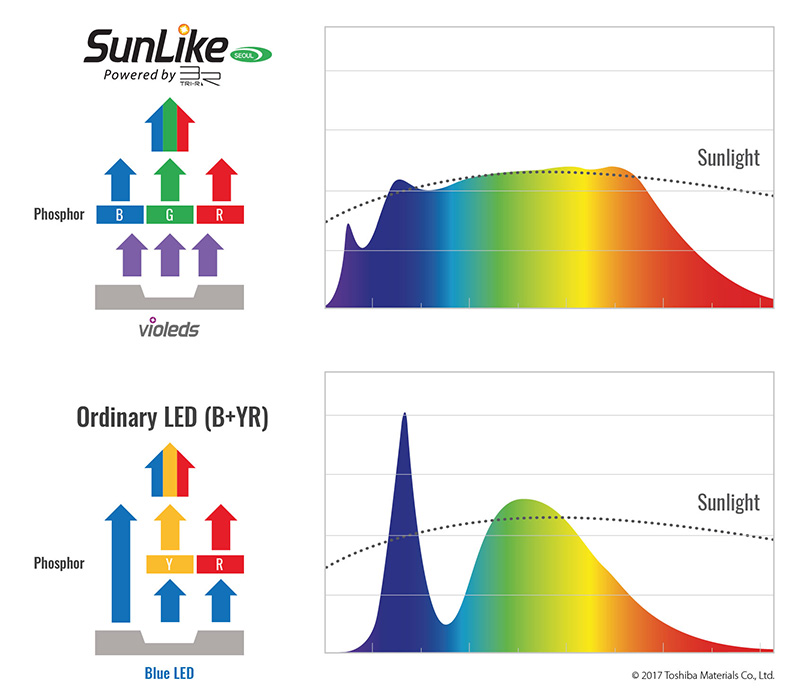 It is immediately noticeable that the most important difference is that in the illumination LEDs of the newest generation the combination of phosphors (phosphor) is being excited by the emission of a purple LED (violeds) and this combination consists of 3 phosphors emitting red, green and blue light. That is – the white light is created by the complete scheme of additive color combination. That predetermines a higher color rendering index.
At the same time, when in the mass-produced usual illumination LEDs, in their combination of phosphors are just only 2 phosphors emitting yellow and red light, is being excited by the emission of a blue LED, the light of which is partially passing through the phosphor and produces a blue component of the LED light.

If you look at the emission spectrums of these lighting LEDs, you can see that the spectrum of the light emission of the newest generation LEDs and the LED lamps built on their basis covers the sunlight spectrum rather well, without drastic exceeding and without deep fade-outs.

At the same time, when in the spectrum of usual, mass-produced lighting LEDs and lamps built on their basis you can notice not just only lack of the light emission in the red part of the spectrum, but also a drastic jump of the light radiation with a wavelength maximum of about 445nm due to the emission band of the blue LED, and a deep fade-out covering the cyan part of the spectrum.
Exactly in this fade-out are 3 vitally important light waves with wavelength:

What is one more reason for to choose for lighting the lamps with lightning LEDs of the newest generation Tri-R/SunLike/Yuji having very high color rendering index.
The truth is, that it will be more fair, for the lamps with a color temperature of 3000K, being more demanded in the everyday life.

(For the Ra/CRI color rendering index system, the R9 index is additional to the 8 major indexes R1-R8 for calculating the total, average color rendering index.
It corresponds to the ability for rendering the shade of red-pink color.
Nevertheless, in comparison to conventional, mass-produced LED lamps, evaluation of the newest generation LED lamps by the R9 index at the all color temperatures still remains high at the all color temperatures.)

After this introduction, there is a relevant question – where these LED lamps of the newest generation, having very high color rendering index is be possible to buy?

As long as we know, such lamps offers an Internet resource sunlikelamp.com related to Belarus.

It is worth noting that the prices of these LED lamps are high. 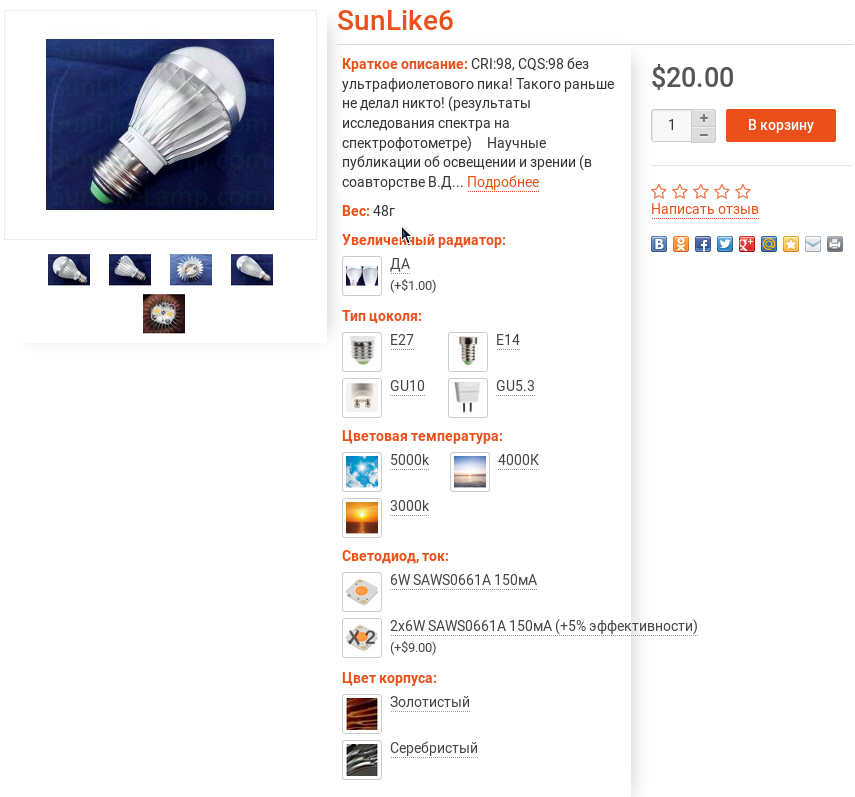 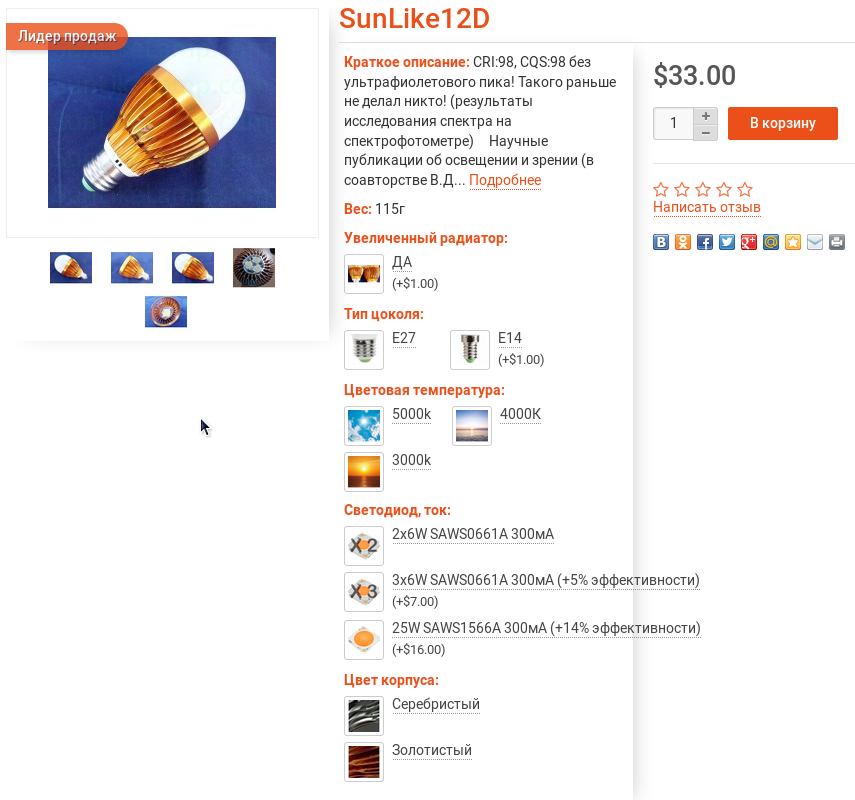 This is due delivering of the LED modules of the newest generation to the market in the small lots, small wholesale.
That the manufacturer of the lamps tries to compensate, by manufacturing these lamps in different designs, handy for customers.

If you are interested in, you can address by the following contacts:

List of the popular and scientific materials (in Russian):